In the patch, our characters feel emotions.

Your character’s feelings are their views of other Sims based on recent events. For instance, events like an adoption, a fight, an affair, or a death, can trigger distinct and powerful feelings between the two Sims involved. The feelings are a result of the events.

Feelings fade and pass with time. The amount of time the feeling’s intensity diminishes depends on whether the sensation lasts for a long time or is short-lived. Most long-term emotions last for seven days, while short-term emotions last four days. The emergence of similar feelings to the ones already present will prolong their duration. Positive feelings that last for a long time are displayed with a vibrant green background, while short-term feelings are shown against a lighter hue. Similar to negative short- and long-term feelings, their icon backgrounds are red. The screenshot below shows it is clear that the “Rally Rising” feeling lasts for a long time, as is “Rallying in Hogo” is only a few minutes in duration (both feelings are derived from the add-on )

The rate at which emotions alter can be affected by a person’s actions. Negative events can easily destroy positive feelings, and apology letters help eliminate any negative feelings. The icon’s background color that shows feelings illustrates how the emotion is diminishing as the new sensation is fully painted when the feeling begins to fade; the background will be only partially painted. The less the color, the more time it takes to complete the disappearance of the sensation. The feeling is

A person can experience up to four emotions about an individual character at any time. If the sim has a different emotion for the character in question, it will replace the less significant feeling already present. For instance, a fleeting feeling that ought to have disappeared quickly enough.

Feelings may be one-sided or reciprocal. It is primarily based on the event that caused the surface or the person who started the sequence of interactions that led to the emotion. For example, when two characters are close friends, then the feeling of “Strong bonds” is shared by both. If all the positive actions of the interaction originate from one person, the positive feelings toward the other person are most likely to be derived from that individual only.

You can observe the change in your feelings right away when you communicate with another character on the panel for relationships displayed on the right-hand side of the screen when you are in an interaction. It will also be where brand new Feeling icons will appear, and you can view them when you click on the tiny book icon at the left-hand part of the screen. 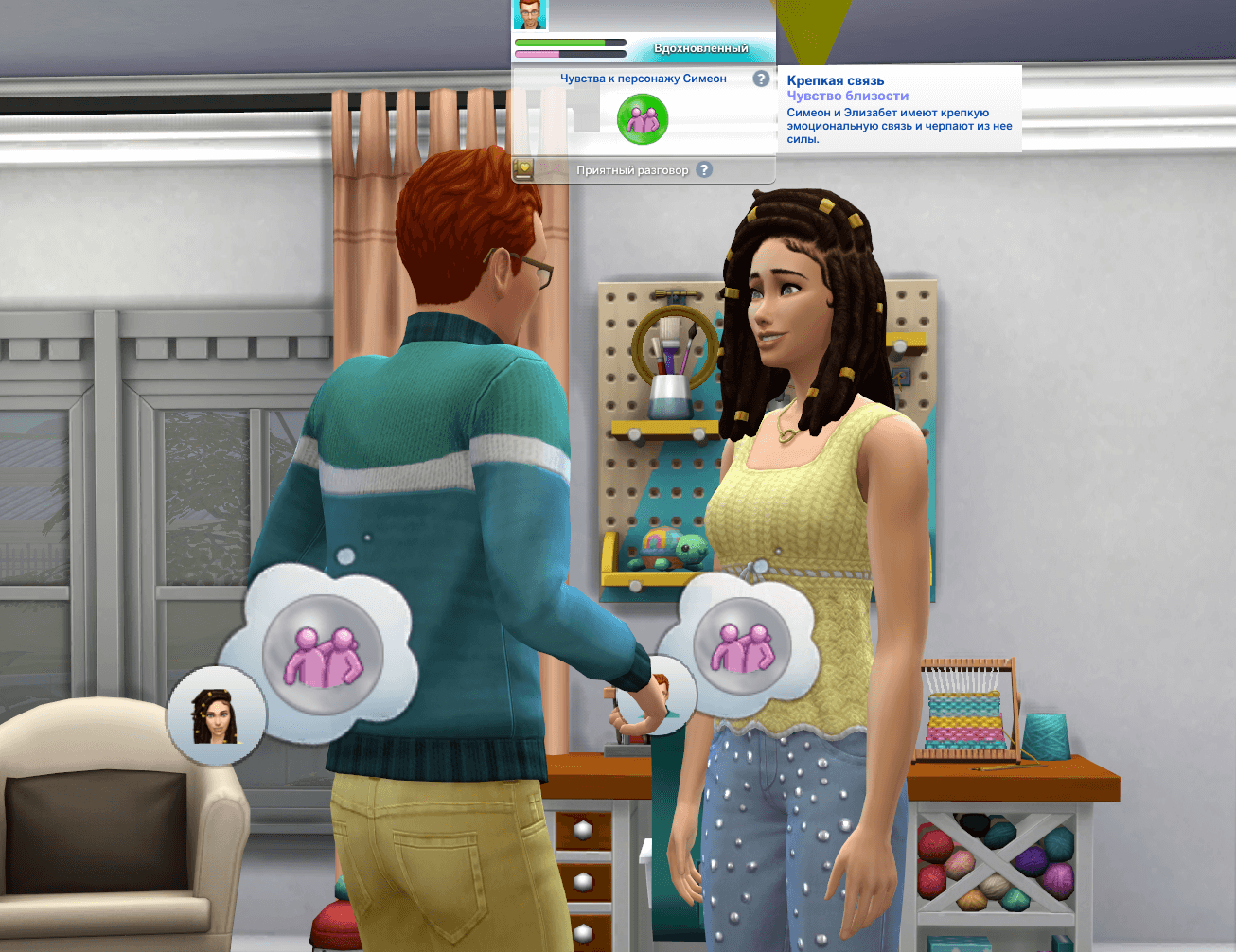 Additionally, a thorough description of the affections the characters share in common can be located in the character profile.The profile also explains the feelings that characters have for each other. 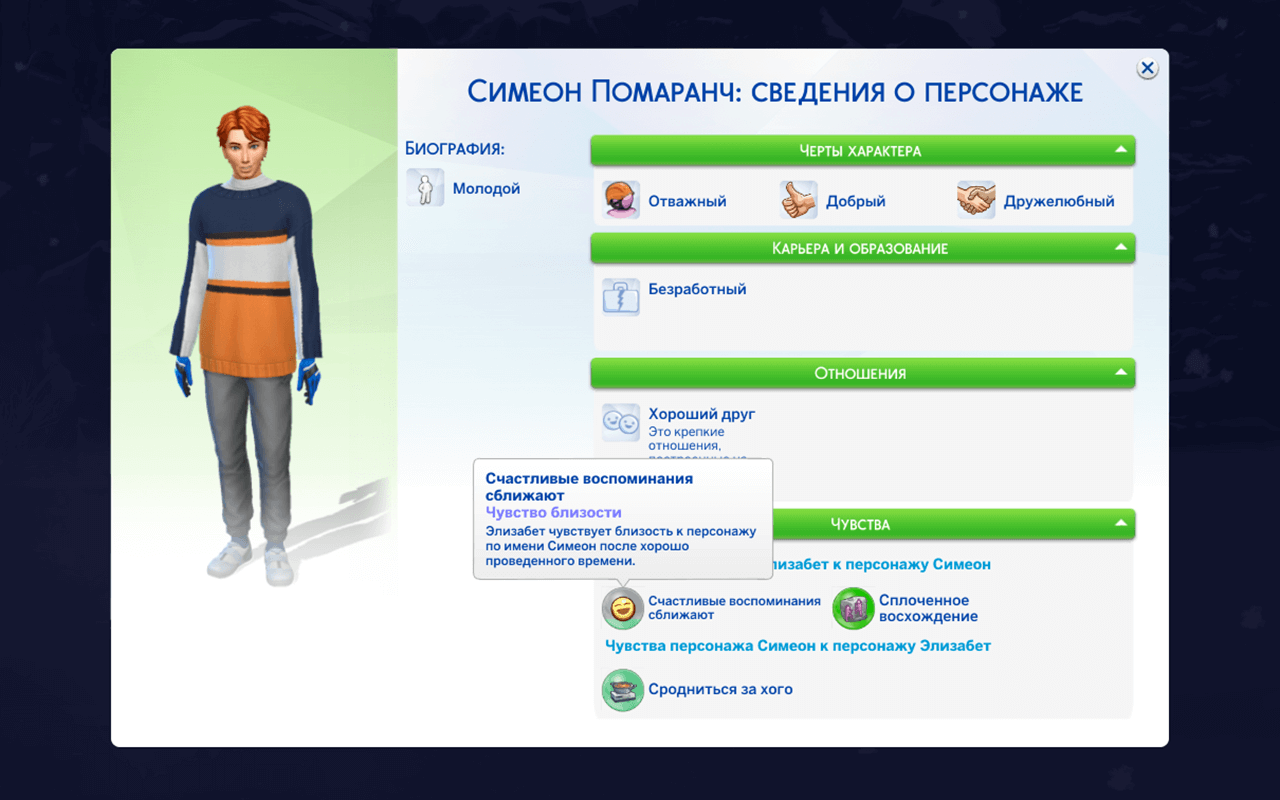 The influence of emotions on the emotions of characters and relationships

The emotion system is an added feature to character relationships, which opens the door to many possibilities. They significantly impact your character’s emotional state, dependent on the characters that are in the vicinity. For instance, a hike in the mountains with”Snowy Plains,” for example, “Snowy Plains,” and a friendly interaction at a social occasion can create positive emotions. As the two sims are active, the characters will feel positive feelings in the form of muzzles as they interact with each other. Similarly, a sim with strong positive feelings towards a sim will be sad when that sim is feeling negative, while the sims with rage will be annoyed in the presence of the person who is inflicting the offense.

For instance, if they feel this way towards one another and are in love, they may get a euphoric “special bond” muzzle when they’re close to each other.

In other words, if you send the child off for creating an accident, it could upset him, and he’ll develop an unfavorable impression of the adult character. The toddler will not only feel a negative smirk when interacting with you and will not be able to stay away from it until they have improved the relationship or until the resentment is gone. In this situation, the adult will not be able to feel negative feelings toward him.

The frequency of mulettes that are positive or negative depending on the character’s feelings is influenced by their level of relationship. In the case of unknown sims positive mulettes may occur less frequently, while those with enemies, friends family members, and lovers, it happens more frequently.

Factors that impact the development of feelings

How feelings are perceived can be influenced by the degree of the relationship, Sims character traits, and all sorts of bonuses and unique characteristics. For example, sims with the attributes of “Bully” and “Choleric” have a higher chance of being influenced by negative feelings. “Good” character traits are more likely not to come into their demons. Romantics are more likely to feel the sensation of being in love. Sims who are “Self-centered” focus on themself that they might overlook the world around them. People with traits like “Control of Emotions” will have a lower chance of experiencing negative emotions, and people with that trait – “Uncontrollable Emotions” will experience more frequently. Similar to Sims, who has the feature “Indifferent,” Most incidents will not trigger feelings. Vampires who have “Suppression of Emotions” will feel less frequently and have the same benefits, but the third stage, “Suppression of Emotions,” is essentially unable to experience emotions.

Furthermore there is the possibility that the emergence of feelings that are new for a character may affect the present. For instance, if an Sim has a feelings of affection or adoration towards another character, the likelihood of developing a negative emotion could be lessened in certain situations.

See also  The Sims 4 Not a Dustbin Kit Review

Every emotion, based on their emotional hue can be classified into a variety of categories:

The emotions that are at this moment can be found below. This list can assist you in understanding the number of emotions are actually present and may assist you in identifying these feelings. It will update when new information is made available.

Positive emotions
Experiences of base games

A feeling of intimacy

The feeling of adoration

Love is in the air

Love is in the air

See also  The snowboarding skill in The Sims 4 Snowfields

Negative feelings
Experiences of base games

A sense of bitterness

A sense of rage

A sense of bitterness

The rage of the crowd